“All Lives Matter”? Not Until Black Ones Do

Be a radical copyeditor. When someone says “all lives matter,” engage with them (particularly if you are a white person, like me), and help them understand why saying this makes things worse, not better.

As many people have articulated over the seven years since the Black Lives Matter movement began, no one interrupts a breast cancer awareness event by yelling “all cancers matter,” or defaces “save the rainforest” bumper stickers with “all ecosystems matter,” or blocks a rescue crew from reaching a burning house because “all houses matter.”

Toni Morrison and the Power of Language 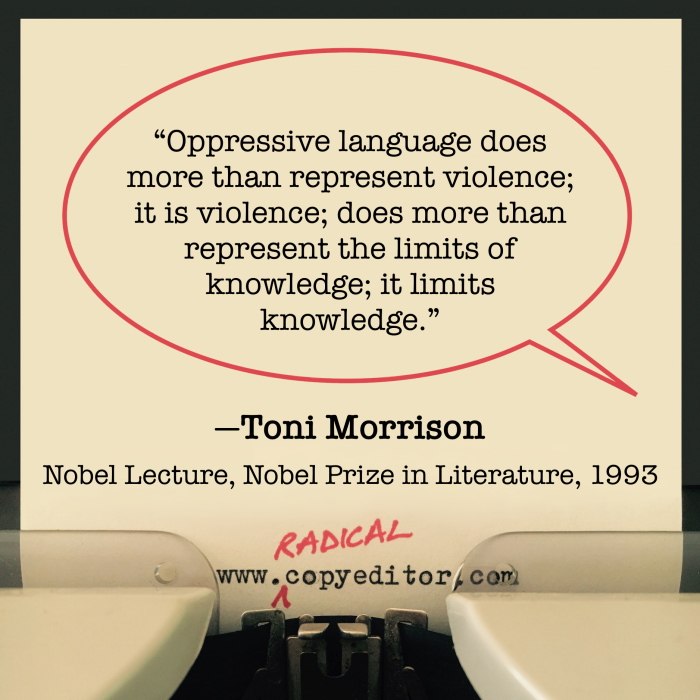 In the days since Toni Morrison became an ancestor, the outpouring of feeling has served as a testament to her greatness and her impact on the world. Thousands—perhaps millions—of people have shared quotes by her and about her, striving yet inevitably failing to express the fullness of what she meant and what she did here on Earth.

The story that white culture has long told about her is that she is a great novelist. (A great, Black, female novelist, of course.) But her greatness could never be contained in such a limited frame, and the millions of people whose lives she changed won’t allow it. For Toni Morrison, being a writer, an editor, a critic, and a teacher were inseparable from one another. She was all of these at once, and more. The power of language demanded no less.

Re-Humanizing Immigrant Communities in the Age of Trump: 5 Language Practices

Over the last year, a number of public figures have drawn praise and ire for referring to the facilities in which tens of thousands of people are being imprisoned by the United States without due process as concentration camps.

What has resulted is a “rhetorical cacophony regarding historical accuracy and proper terminology,” in the words of Lauren Duca of The Independent.

If, like me, you believe that language not only describes but creates reality, the primary question should not be “what is the correct definition of concentration camp and is that definition being accurately applied?” but rather “how am I morally obligated to describe and respond to what is happening at the U.S.-Mexico border?”

The five practices below are designed to help you use language to humanize in the face of dehumanization and practice liberation in the face of violence and hate. But first, some context.

What’s in a Word: Enby

The word enby, alternately spelled enbie or enbee and pluralized as enbies or enbys, refers to a non-binary person (someone whose sense of self is not exclusively girl/woman or boy/man).

Ask a Radical Copyeditor: Are There Limits to Self-Identity Language?

Are There Limits to Self-Identity Language?

Q: In response to your piece about person-centered language, my mind goes to difficult situations where I’ve interacted with marginalized people who use/identify comfortably with terms I understand to be oppressive, e.g., a trans woman using the term “tranny.”

In another more privileged direction, I’ve interacted with people who don’t identify with the term “cis” despite being cis, and have heard members of oppressed groups say, “you don’t get to choose not to be cis.”

So I guess my internal query is, how far does the agency of one’s identity go? And does language that marginalizes an oppressed group supersede the desire of an individual in their expression of identity through language?

Today I made a third major update to The Radical Copyeditor’s Style Guide for Writing About Transgender People to add four sections on how to avoid writing or talking about trans people in ways that are invalidating or otherwise harmful. (Remember that context is everything, and that all trans people have a right to describe themselves in whatever language feels best to them.)

I also updated section 1.4 and the note that follows it to reflect better language that has emerged for instances when you want to be clear that when you say trans you aren’t referring only to trans women and men but also non-binary people, as well as the recent trend in trans communities to perceive trans and transgender as having separate meanings.

See below for these new sections or click through for the updated style guide.

Should I Use the Adjective “Diverse”?

It has long been a pet peeve of mine that the word diverse is widely misused in the English language. Diverse is defined by Merriam-Webster (my favorite dictionary) as:

Unfortunately, diverse gets misused to refer to people or things that differ not from one another, but from what is considered to be mainstream, dominant, or the cultural norm.

Thanks to great feedback from readers, it quickly became clear that The Radical Copyeditor’s Style Guide for Writing About Transgender People was missing vital guidance on writing about bodies and anatomy in ways that are sensitive and inclusive.

So today I made the second major update to the style guide by adding two sections: one on practicing sensitivity around trans people’s bodies and anatomy in particular, and one on decoupling anatomy from identity when referring to people in general.

See below for these new sections or click through for the updated style guide.


Update to Transgender Style Guide: “They” as a Personal Pronoun Thanks to great feedback from readers, I realized on Sunday that the style guide I published last week was missing a section. The guide addresses singular they as a generic pronoun for people whose gender is unknown in section 3.1, but it did not explicitly provide guidance on singular they as a personal pronoun.

Therefore, yesterday morning I added a new section: 2.4.4. Respect singular they as a personal pronoun and use it appropriately.

Click through to “The Radical Copyeditor’s Style Guide for Writing About Transgender People” to read the update in full, complete with helpful hyperlinks.

The Radical Copyeditor’s Style Guide for Writing About Transgender People

A style guide for writing about transgender people is practically an oxymoron. Style guides are designed to create absolutes—bringing rules and order to a meandering and contradictory patchwork quilt of a language. Yet there are no absolutes when it comes to gender. That’s why this is a radical copyeditor’s style guide. Radical copyediting isn’t about absolutes; it’s about context and care.

There are profound reasons for why the language that trans people use to describe ourselves and our communities changes and evolves so quickly. In Western culture, non-trans people have for centuries created the language that describes us, and this language has long labeled us as deviant, criminal, pathological, unwell, and/or unreal.

As trans people have fought for survival, we have also fought for the right to describe ourselves in our own language and to reject language that criminalizes, pathologizes, or invisibilizes us. Just as there is no monolithic transgender community, there is also no one “correct” way to speak or write about trans people.