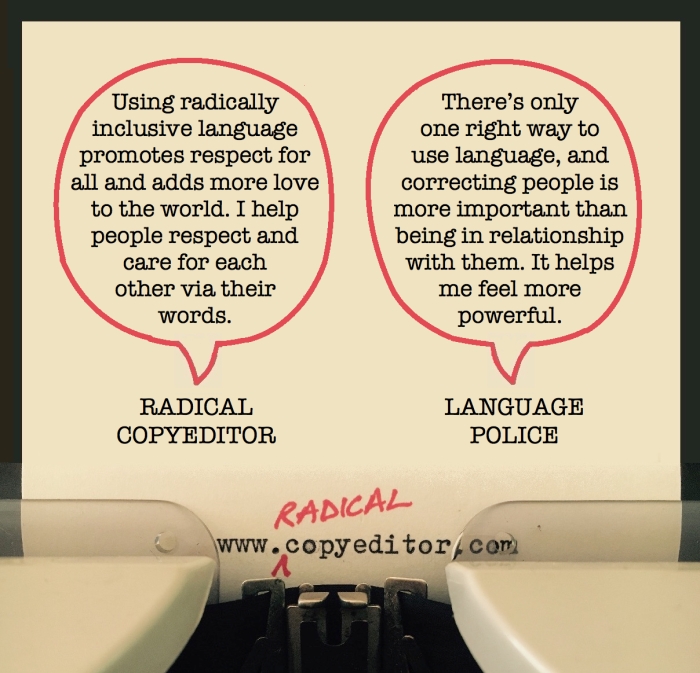 Radical copyediting helps language describe the best, most radical reality we can imagine—a world free from violence and oppression where all life, all identities and experiences, and all ways of making meaning are valued.

In short, radical copyediting is not language policing.

The term “language police” is sometimes used for people who go about correcting other folks’ words, grammar, punctuation, and so forth, generally in ways that are singularly focused on language “rules” and intolerant of anyone who doesn’t follow those rules.

There are different reasons for why people become language police. Some people are grammar snobs, and they can’t keep themselves from shouting from the rooftops that someone used an apostrophe wrong.

Other people police language from a place of personal woundedness or an attempt to carve space for themselves in the world—for example, the atheist who is so tired of language that assumes all people are Christian that she becomes incensed when anyone refers to God at all, or the trans man who has struggled so hard to claim his identity that he won’t allow anyone else to use the word trans who doesn’t have the exact same experience of trans-ness as he does.

Context is important because the standard for a text message doesn’t need to be as high as the standard for a print magazine—as long as the people on either end of the text exchange understand each other, all is well. And if you’re at a Chinese food restaurant and the syntax or punctuation within the menu isn’t conventionally perfect, does it really matter? English is ridiculously difficult; sometimes it seems like it’s difficult just for the sake of being difficult.

There is nothing radical—or even okay—about shaming or making fun of people who don’t use conventionally “proper” English, whether it’s because they are an English language learner, they speak a dialect of English, they have a speech impediment or disability, they didn’t receive a good-quality education, or any other reason.

The experiences of people who are most marginalized are important because the standards and rules that govern the English language have historically been set down by people with the most power. For proof, there’s no need to look any further than the way that African American Vernacular English, or Ebonics, has been treated by (white) mainstream culture throughout U.S. history (Lisa Delpit’s classic 1997 take is well worth the read).

Thus, when weighing whether to uphold a particular language convention, it’s important to consider why it exists, who benefits from it, and who struggles more because of it.

Radical copyediting recognizes that, as Melissa A. Fabello of Everyday Feminism has eloquently argued, “grammer snobbery has no place in the movement.” It also recognizes that suggestions that are made to improve language must be done with compassion and humility, and with the end goal of increasing comprehension and respect.

So how will you use your language skills? Say no to the language police and join me in being a radical copyeditor.