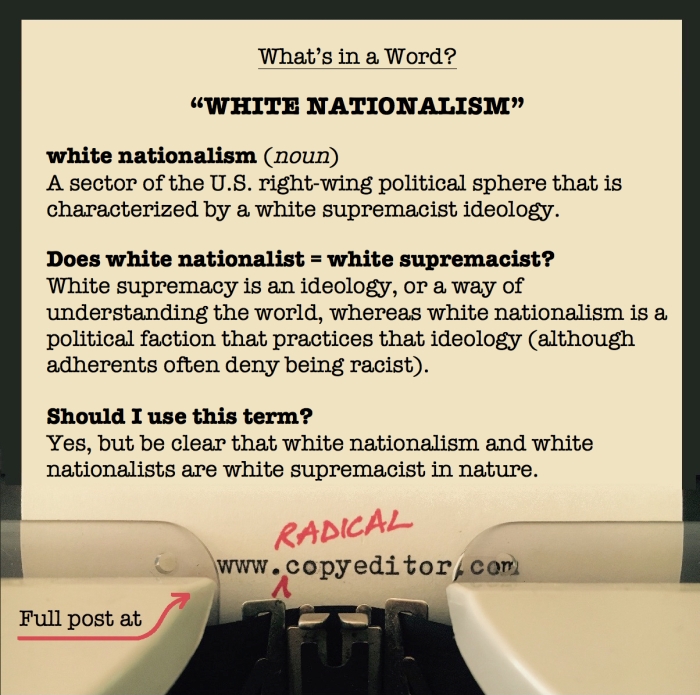 White nationalism is a sector of the U.S. right-wing political sphere that is characterized by a white supremacist ideology.

As Chip Berlet explained, in a 1992 piece co-authored with Margaret Quigley, white nationalism “oscillates between brutish authoritarianism and vulgar fascism in service of white male supremacy” and white nationalists believe that “social problems are caused by uncivilized people of color, lower-class foreigners, and dual-loyalist Jews.”

What’s the difference between white nationalism and white supremacy?

White supremacy is an ideology—a way of understanding the world—as well as a system of oppression, whereas white nationalism is a political faction that practices that ideology and upholds that system.

Some, such as Barbara Perry in her 2001 book In the Name of Hate, and Mana Kharrazi, at “Beyond the Safety Pin,” have argued that white nationalism is a coded term for white supremacy, or a rebranding of white supremacy.

Although the terms aren’t synonymous, it is true that white nationalist groups trade in using coded language to obscure their white supremacy. As Perry points out:

In their search for respectability, some hate groups have rejected explicitly racist terms for more “subtle” code words that act as proxies for traditional rhetoric. Primary among these is the assurance that they don’t hate blacks or Jews or gays; rather they simply love their own race.

This is what makes it possible for blatantly white supremacist leaders like Richard Spencer and David Duke to deny being white supremacist while simultaneously saying things like, “America was until this past generation a white country, designed for ourselves and our posterity. It is our creation, it is our inheritance, and it belongs to us.”

White nationalists often claim that it’s not that they hate people of color, it’s just that they naturally, as white people, love white people best—and, importantly, they wholeheartedly believe that white people and white culture are under attack.

They see white people and white culture as inherently or “naturally” superior, but instead of understanding that this is actually the definition of white supremacy, they are convinced it’s simply an unassailable truth.

Should I use this term?

What’s your take on white nationalism? Comment below! Want to ask a radical copyeditor something? Contact me!

Note: Many thanks to Jessica Campbell, co-director of Rural Organizing Project, for her help with this post.

3 thoughts on “What’s in a Word: white nationalism”