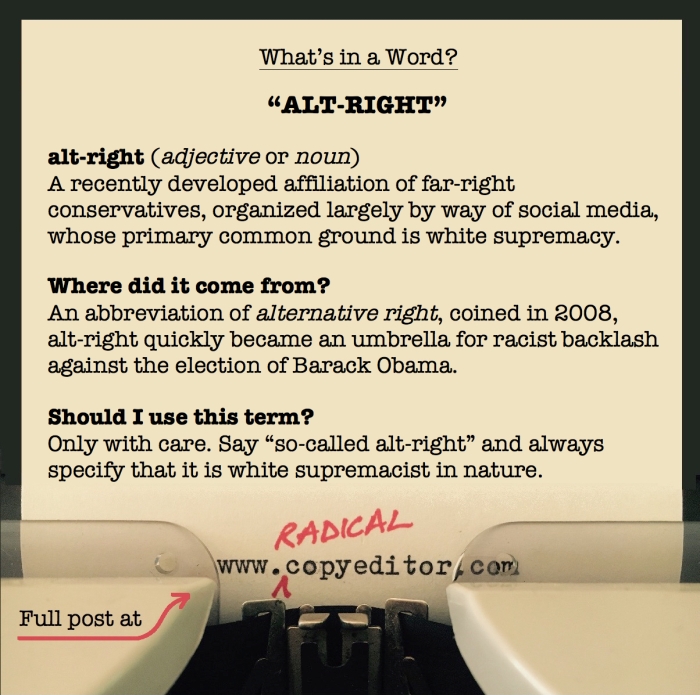 What’s in a Word?

The term alt-right, short for “alternative right,” refers to a recently developed affiliation of far-right conservatives, organized largely by way of social media, whose primary common ground is white supremacy.

A set of far-right ideologies, groups and individuals whose core belief is that “white identity” is under attack by multicultural forces using “political correctness” and “social justice” to undermine white people and “their” civilization.

The Los Angeles Times recently described it as:

Breitbart, a self-avowed major platform for the alt-right (whose executive chairman was just tapped to be Trump’s chief White House strategist, after running his campaign for president) identified four primary alt-right strands:

Where did it come from?

The term alternative right was coined in 2008 by Richard Spencer, head of the National Policy Institute, a white nationalist think tank, who went on to create AlternativeRight.com and Radix Journal.

The alt-right can thus be interpreted as the flip side of the social media coin that has unified organizers and activists for social change. As the left used social media to organize and rally around Obama, formerly fringe elements of the right also began finding each other. And as campaigns like #BlackLivesMatter gained steam, so too did the alt-right. In 2015, when Donald Trump increased in popularity and ultimately secured the Republican nomination for president, the alt-right really took off, seeing in Trump a champion for their cause.

Merriam-Webster offers a great take on “alt-” specifically, in this context: “A combining form which evolved from Internet culture is now being used to repackage old-fashioned bigotry.”

Should I use this term?

My best recommendation at this time is to:

Including the phrase so-called gives the reader or listener the information that the term is not fully accepted or at least is not in common use. More importantly, being clear that the term refers to a white supremacist faction keeps it from being interpreted in a seemingly neutral or sanitized way.

A number of people—for example, Maria Hinojosa, anchor and executive producer of National Public Radio’s Latino USA—have said they won’t use the term, that they would rather say “white supremacists” or “racists” instead of “alt-right.” Some argue that “alt-right” is a euphemism for white supremacy. 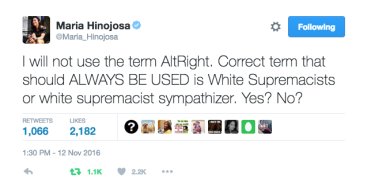 Therefore, it’s important to name the alt-right as a faction, and it is vital to be clear that it is white supremacist in nature. A radical copyeditor ensures that “alt-right” isn’t used in a way that makes it seem neutral, normalized, or, worse of all, hip.

Some radical copyeditors out there have re-named the alt-right as “alt-Reich” as a way of being clear about its white supremacist and specifically neo-Nazi underpinnings.

On November 22, ThinkProgress announced that it would no longer use the term alt-right, saying:

A reporter’s job is to describe the world as it is, with clarity and accuracy. Use of the term “alt-right,” by concealing overt racism, makes that job harder. … The point here is not to call people names, but simply to describe them as they are. We won’t do racists’ public relations work for them. Nor should other news outlets.

On November 28, the Associated Press came out with bold guidance for how responsible journalists should use—or not use—the term, recommending that it be put in quotes or paired with “so-called” or “self-described,” and specifying: “Whenever ‘alt-right’ is used in a story, be sure to include a definition: ‘an offshoot of conservatism mixing racism, white nationalism and populism,’ or, more simply, ‘a white nationalist movement.'”

Author John Daniszewski, Vice President for Standards, went on to say: “We should not limit ourselves to letting such groups define themselves, and instead should report their actions, associations, history and positions to reveal their actual beliefs and philosophy, as well as how others see them.” 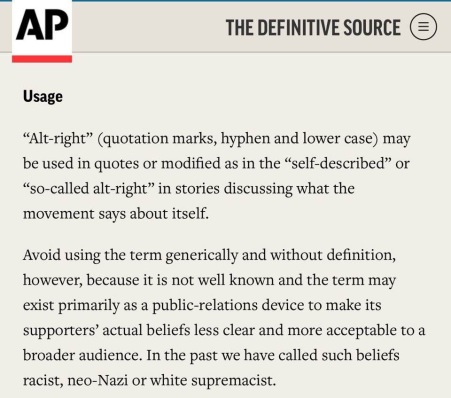 On November 30, The Guardian issued the editorial guidance that alt-right should be used “in quotes, at first mention, followed by the brief but broad description of it being a far-right movement.” The newspaper’s style editors further clarified:

On December 5, in a memo to its editorial staff, The New York Times announced that alt-right should not be used unless the article also explains that the group “embraces white nationalism and a range of racist and anti-immigrant positions.” NYT Standards editor Phil Corbett wrote that he didn’t think banning the term was the best approach, instead advising:

Let’s avoid using ‘alt-right’ in isolation, without an explanation (which means it will rarely be appropriate in headlines). … It’s a racist, far-right fringe movement that embraces an ideology of white nationalism and is anti-immigrant, anti-Semitic and anti-feminist.

Note: Many thanks to Sarah Grey for her radical copyediting of the featured image on this post and her suggestion to change “racial backlash” to “racist backlash.” She cited the book Racecraft by Barbara and Karen Fields and the fact that while race is a social construct, racism is very real.

Also, this piece was revised November 18 to add more discussion regarding whether or not “alt-right” can be considered a euphemism for white supremacists. It was revised again on December 10 to add the final section of examples of positive role models on this subject in the media.